The history of the “Cité de la Muette”

The Cité de la Muette in Drancy was designed in the 1930s as a low-income housing complex. Unfinished when the war broke out, it served as an internment and assembly camp for Jews. Nearly 63,000 were deported from there to the extermination camps.

The Cité de la Muette in Drancy was designed in the 1930s as a low-income housing complex. The Germans confiscated the site after defeating France in 1940; in the early 1940s they used it as a camp to intern Jews arrested in France and group them together before deportation. Built as a subsidized garden city between 1931 and 1937, it was intended to offer working-class families the latest in modern comfort and hygiene. The construction methods were also innovative: standardized, prefabricated concrete slabs and metal parts were shipped to Drancy and assembled on site. The 1,250 housing units were spread out in five 14-floor towers with two- and three-story buildings extending outward from them from either side like arms. This part of the complex was called the “comb”. The right-angled U-shaped building to the northwest, known as the “horseshoe”, was designed as a community center. It is the only building still standing. 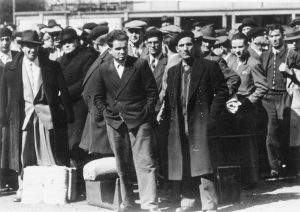 Arrival of the first interned at Drancy

The Cité de la Muette fell short of expectations when it was delivered to the developer in 1937. High rents, an isolated location and shoddy workmanship discouraged families from moving in. Eventually, the Ministry of War rented the towers and “comb” out as housing for the mobile Republican Guard.

In July 1940, the Wehrmacht requisitioned the complex, using it as a temporary detention center for French and British POWs. The four-story “horseshoe”, built around a courtyard 200 meters long by 40 meters wide, had the ideal layout for an internment camp. The Germans surrounded it with two rows of barbed wire and a sentry walk and built watchtowers at the corners.

Drancy: the assembly point for Jews before deportation 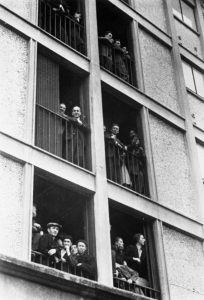 Prisoners in the Drancy camp windows

In 1941, the Cité de la Muette became an internment camp. After the roundups in Paris and mass arrests of the previous days, on August 20, 4,230 men were transferred to Drancy. Living conditions were appalling. The buildings were unfinished. Hygiene was dreadful and food scarce.

Humiliation, a no-visitors policy and violent gendarmes — Drancy was still under the administration of the prefect of police — compounded the internees’ misery. The health situation was so unmanageable that in November 1941, a German medical commission released nearly 1,000 detainees, including the youngest and sickest.

From December 1941 to March 1942, hostages were regularly removed from the camp and shot at Mont-Valérien or deported in retaliation for actions by the Resistance.
Being near the Bourget-Drancy and Bobigny railway stations, in summer 1942 Drancy became the main place where Jews arrested in France were held before deportation to the extermination camps. Nearly 63,000 of them left from Drancy, most for Auschwitz-Birkenau.

The file of names is saved

As the Allies advanced in early summer 1944, thousands of Jews were brought from the South of France to Drancy before deportation. The last transport left on August 17, 1944. Aloïs Brunner, an SS officer who became head of the camp a year earlier, had his men escort the deportees from Drancy to the Bobigny freight station on foot. They set fire to the camp’s archives before leaving, but two internees managed to save the file of names. The Resistance took over the camp and the last remaining internees were free three days later.

After the liberation of Paris, the Drancy camp was used to detain suspected collaborators, including writer-director Sacha Guitry, opera singer Germaine Lubin and Pierre Taittinger, president of the Paris Municipal Council from May 1943 to August 1944.

A place of history and remembrance 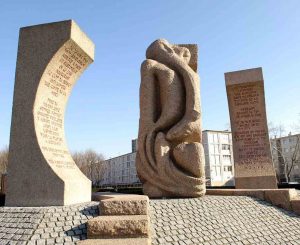 Shelomo Selinger Monument, to perpetuate the memory of the Jews imprisoned in the camp of Drancy

Auschwitz-Birkenau survivors started organizing commemorative ceremonies at Drancy as early as 1946. From 1948, the buildings gradually reverted to their original purpose and tenants started moving in.

Between the 1950s and the 1980s, the Holocaust gradually seeped into France’s historical consciousness. Survivors began speaking up, although few listened to them, and organizations campaigned to have a memorial built at Drancy.

Sculptor Shlomo Selinger’s commemorative monument was unveiled in 1976 and the memorial freight car arrived at the site in 1988. In 2001, the Cité de la Muette became a designated national historic landmark.

After a campaign by the Fondation pour la mémoire de la Shoah, the Drancy Shoah Memorial opened to the public on September 23, 2012.